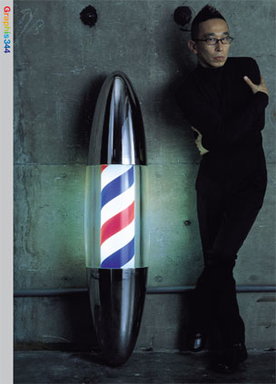 The iconic fashion designer handed over his image-making to creative director Naoki Takizawa who collaborated with an inventive roster of designers. Hideki Nakajima is one of them--him too picks ingenious creators for an ad campaign.

20 Fabien Baron: One Man Renaissance-Part I By Ken Coupland

46 Springer & Jacoby: Simplicity in a Complex World By Imke Lode

60 Mark Power: The Power of an Idea By Lyle Rexer

Time, memory, space and spectacle--and everything in between. The London-based photographer's well-edited photo sequences assemble decisive moments into unfolding annals. Let us be captured by his stories.

Satoh's design philosophy consist of avoiding excess. His packagings reveal a sense of design that is meaningful rather than just newer. Invisible design lets the "emancipated" consumer replace products within his own lifestyle and make it his.

96 American Folk Museum: A Building of Firsts By Susanna Sirefman

The American Folk Art Museum, built by the celebrated architects Billie Tsien and Tod Williams, is the first new museum built in Manhattan since 1966. "Direct, authentic and freeing" are words that describe both the building and its collection.

Author Sante addresses the genre of vernacular photo-postcard of the early 20th century.