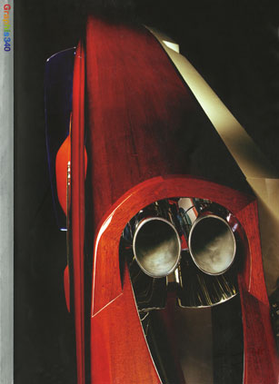 13 Everything Changes but the Avant-Garde By Brad Holland

12 "Reflections in the Glass Ceiling" By Véronique Vienne

20 onetree: The Spirit of the Wood By Ken Schulman

28 Constructing an Alternative History of Modernism By Michael Webb

As a spokesman for the next generation of Japanese designers, Hara, chosen to head the Nippon Design Center, infuses old traditions with new ideas.

Ever since they started their own ad agency in 1998, Michael Weigert, Bagher Pirouz and Ewald Wolf are hungry to create the best ads and lead the rest of the pack.

Israeli-born Ilan Rubin shoots photographs that blend the sublime with the absurd.

One of the Dutch design's prime movers, meet the man behind the Dutch magazine logo and the Groninger Museum identity.

100 Craig Frazier: Things Are not What They Seem By Kirk Citron

In 1996, the graphic arts lost a designer but gained an illustrator. Today, a restless perfectionist tries to remake the world in his own image.

This publishing mogul's latest venture is heading south into the untapped markets of Mexico.

As one of Europe's top design leaders speaking out against corporate design, Edelmann retains his sharp focus and sense of humor in this enlightening interview.