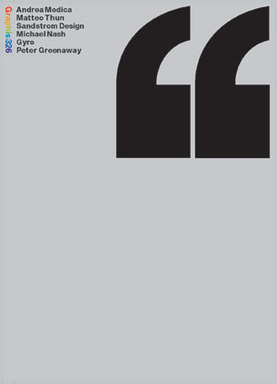 10 The Book on the Bookshelf Reviewed by Phil Presby

12 Beyond the Abstract Cabinet Reviewed by Lyle Rexer

14 Found Image: In Praise of the Imperfect By Rick Poynor

16 Report from the AIGA By Véronique Vienne

26 Andrea Modica: Coming Into the Picture
Haunting and homey at the same time, Modica's platinum print photographs take us to one of the most conflicted places we can know: the personal. By Lyle Rexer

38 Matteo Thun and the Death of Design
Architect/designer Matteo Thun has a lot going for him, and for us he has an eerie prediction for the future of design. By Andrea Lee

46 Sandstrom: Almost Threatening
Being small gives this Portland firm room to be in your face. Match their little scale with their big success and you get a whole new set of challenges. By Fred Moody

62 Michael Nash: The Two-in-one Firm
A couple of British designers who also happen to be couple, Anthony Michael and Stephanie Nash practice in a high-fashion state of mind. By Hugh Aldersey-Williams

74 Gyro: In the Eye of the Storm
This Philadelphia ad agency is where political correctness goes to die. Calling the shots is the admired, loathed and controversy-loving Steven Grasse. By Warren Berger

84 James McMullan: Peopling Posters
As his posters for the Lincoln Center Theater illustrate so well, McMullan knows how to literally draw people in. By Mel Gussow

96 Peter Greenaway: Against the Tyranny of Cinema

150 IDSA Designs of the Decade