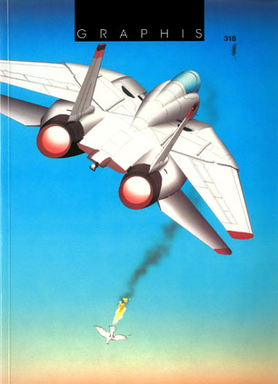 10 How Standards Became a Dirty Word By Rick Poyner

16 The Electronic Brochure Gets a Makeover By Ken Coupland

32 Socio X: Scarily Ahead of the Curve
Art director for 11 years at the funky, downtown Paper Magazine, the stylish Bridget de Socio talks about her own design firm, the future as she sees it, and why she'd rather be a cause than an effect. By Alexandra Lange

50 Guy Billout's Parallel Universe
The French-born illustrator and philosopher-in-residence at The Atlantic Monthly creates a world of inverted perspective that challenges not only the laws of physics, but our deepest fears. By Véronique Vienne

62 Pyro's Mild-Mannered Prophet
Todd Tilford's campaign to subvert the formula has run into some obstacles: clients committed to the status quo, and an agency landscape dominated by big players. By Dick J. Reavis

90 The Journals of Dan Eldon
At the age of 22, Dan Eldon was killed while working as a photo-journalist in war-torn Somalia. He left behind a stunning visual legacy-a life story in the form of 12 hand-made, multi-media journals. They now appear as a book. By Alexandra Lange