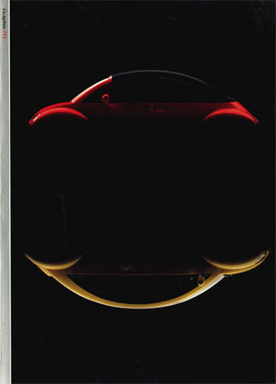 Cover Volkwagen's original Concept 1 cars form the basis for the company's updated Beetle, due out in February and designed to bring VW's commercial fortunes full-circle.

Maestro at the Modern: Castiglioni at MoMA By Mel Byars

10 Contributors to this Issue

Marks of Excellence: History of Trademarks Reviewed By Rynn Williams

25 Design Practice
Fear kills great design: Brilliant prototypes often end up on the cutting room floor, victims of a corporate fear of failure. What lessons do they teach? By Paul Kunkel

32 Volkswagen: Bringing back the Beetle
How Audi designers secretly developed a 21st century Beetle, creating a potential new market for Volkswagen worth more than $1 billion. By Martin C. Pedersen

40 Alessi: It's a family affair
Alberto Alessi reaches out to the international design community, and in the process builds a $100 million-a-year company. By Heather O'Brian

50 Dorling Kindersley: Eyewitnesses for the information age
In an age when books compete with interactive and broadcast media, DK mines all three markets, with annual sales of 40 million print, video and multimedia titles. By Jack Crager

62 Pyramid: Spinning ales into gold
CEO George Hancock tells why his Seattle-based microbrewery will survive the onslaught from huge beer companies and emerge as a national brand. By Fred Moody

70 Schrager: Every day the curtain rises
With occupancy rates at his five hotels at over 90 percent, Ian Schrager looks now to expand his design-driven empire. By Mervyn Rothstein

78 What Makes A Great Client?
Five of the world's most successful clients reveal how they inspire their advertising agencies to produce innovative, results-driven work. By Warren Berger

96 Interview: Murray Moss
New York's Moss is a store-cum-design-museum that blends commerce with the aesthetics of high-end products. Its owner explains why. By Edna Goldstaub-Dainotto