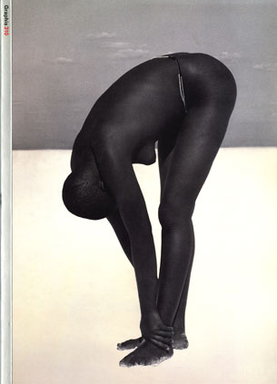 11 Contributors to this Issue

14 Global Report
Meier's "Church of the Year 2000", by Gianfranco Mantegna.

18 Consumer Products
Technological innovations in high-end cameras...the interactivity of designer silverware...the art of the modern nutcracker...clocks and locks from the MoMA Design Store.

25 Interview: Jane Alexander
The chairman of the National Endowment for the Arts speaks out about the controversies surrounding her agency-and the crucial importance of the arts. By Jacqueline Trescott

28 Herb Ritts: The Changing Faces of Humanity
Whether he's photographing native cultures in remote areas of Africa or shooting the stars in Hollywood, Herb Ritts has a gift for enhancing the aesthetics of his subject's persona. By Michael Kaplan

40 Emery Vincent: Shaking the Tree
As the creative force behind one of the premier graphic design consultancies in Australia, Garry Emery is unapologetically emphatic about the intellectual basis of good design. By Virginia Trioli

52 Wired Ventures: Seeing Digital in a Wired World
After making magazine history with their brash publication about the brave new electronic world, the creators of Wired have discovered some of the business perils of cyberspace. By Ken Coupland

62 Fernando Medina: Time of the Essence
Faced with the design challenge of creating "something new and personal," Spanish-born designer Fernando Medina turned to something as old as time itself. By Rynn Williams

70 Design & Business: Dysoning up the Competition
Inventor James Dyson found that when he tried to use his vacuum cleaner, "there was hardly any suck." With frustration as the mother of invention, he created a juggernaut. By Jan Burney

74 BJ Krivanek's Monuments to the Masses
As a designer, artist, and educator, Iowa native BJ Krivanek has dedicated his career to celebrating people who are shunned, ignored and pushed to the edges of society. By Juanita Dugdale

84 ADCN: Lamps to the Future
After experimentation and trendiness, the advertising industry in northern Europe seems headed back to the basics. In the Netherlands, this returns an emphasis on content over form. By Tracy Metz