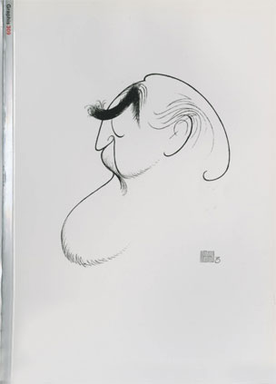 A Double Life of 80 AGI Designers, reviewed by Jurgen Riehle.

17 Consumer Products
Watch prototypes from the students at Art Center...sunglasses from Nike..."Spartacus" from the Apple Industrial Design Group...new digital camera from Sony

22 Johnson Banks: New Generation of British Wit
Although critics may say he relies too much on his wit, a longhair from London finds success through his trademark humor and simple, red-hot designs. By Tracy Rozhon

34 Al Hirschfeld: With the Luck of the Drawings
There has been one unifying constant in the theater: Al Hirschfeld, who for more than 70 years has chronicled and elevated the theatrical experience through his art. By Mel Gussow

40 Design & Business: Ties to Commercial Fortunes
How do you further build a brand that already enjoys a sterling reputation? The partnership of Robert Talbott, Inc. and Michael Vanderbyl prove that design can be a wieldy tool. By Chris Barnett

50 David Tartakover: The Imagery of Hope
David Tartakover's sharp, caustic and thought-provoking art is a response to the reality he lives in - a volatile environment perpetually at the brink of chaos. By Edna Goldstaub-Dainotto

58 Karim Rashid: The Art of Experiential Objects
In a profession so often marked by cut-and-dried thinking and corporate compromise, industrial designer Karim Rashid uses cutting-edge aesthetics and a holistic approach. By Andrea Codrington

68 Tom Bonauro: Natural Selections
Bonauro's idiosyncratic, allusive style has struck a responsive chord outside the art world - earning him high-profile commissions including the juggernaut campaign for 501 jeans. By Ken Coupland

97 Commentary: Imagery in the Networked Age
Thanks to digital media, the imagery of speed has given way to the imagery of simultaneity. The result? A visual morass where we can't efficiently move through space anymore.

145 Kozue Naito and the Cloth Menagerie
Kozue Naito is one of the few female stars of the Japanese art world, a costume artist who creates works of art that also happen to serve as clothing. By Masami Kikuchi