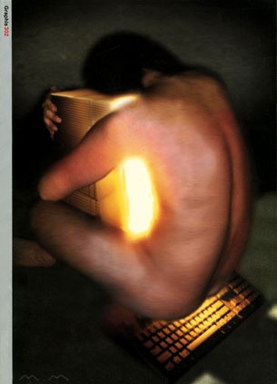 16 On the Origins of the Future:
Paul Saffo, Director of the Institute for the Future, gives his cogent and often irreverent views on what the future of communications holds in store for graphic designers. By Ken Coupland

20 Probing the depth of the surface:
Contemporary graphic design is well-supplied with mythmakers and stars, but Clement Mok is emerging as the ultimate insider in the rapidly evolving theater of new media. By Paolo Polledri

38 The Melding in the Mind's Eye:
Ryszard Horowitz embraced the emergence of digital technology in the 1980s as a natural extension of photography, and now he stands as a pioneer in the dubious territory of digital imagery. By Jack Crager

46 Beaming Sting into Interactivity:
A navigation through "All this time," the CD-ROM product of the synergetic creative partnership between Sting and Starwave. By Scott Mednick

52 The Ghost out of the Machine:
Illustrator and Photographer Matt Mahurin tackles explosive themes using imagery that is lurid, visceral, and surrealistic. His work is hard to miss and harder to ignore. By Ken Coupland

60 The Light & Magic of Jumanji:
Before simulated lions and monkeys could take over the big screen, Industrial Light & Magic had to figure out what to do about the fur. By Roanna Martin-Trigona

66 The Aesthetics of Science + Fiction:
From Public Service Announcements to virtual clublands, Frankfurt Balkind Partners' design products are works that include any and all types of media - conventional, new, and barely emerging. By Jurgen Riehle

72 Imergists for the Next Millennium:
What sets Imergy apart from the new media pack, besides its habit of incorporating ground-breaking technology into multimedia projects, is its sensitivity to the end-user. By Roanna Martin-Trigona

145 Design Critique: The World Wide View of Erik Spiekermann
The Typographer and Information Designer Discusses the Web, the Net, and Constant Values of Design in a World of Upheaval, by Hugh Aldersey-Williams

150 Infoscape: Reformations and Deconstructions
This is not a time of clarity, but of opportunity, by Steven Holt and Gregory Hom of Frogdesign

160 Endpaper: World Wide Web
Risk or Opportunity? As a network offering the entire globe at a relatively low cost, the Web is a photographic frontier. Does http mean "Here, take this picture?" by Richard Lewin